Last week I attended a dementia care conference with Helen.

The conference was informative, but quite honestly, for me, the day was more about spending time with my daughter than about going to a conference. Helen is excited about pursuing something in nursing that supports caregivers and our aging population. Seeing her excited, passionate, and so engaged was worth the price of the conference.

At one point, one of the speakers mentioned going into the home of a person with dementia and looking in their refrigerator. The only things in it were vodka and Ho-Hos.

Helen leaned over to me and whispered, “That could be the title of a blog.”

“You know, Vodka and Ho-Hos, like Hot Dogs and Marmalade,” she said.

I’ve gotten so used to Hot Dogs and Marmalade as my blog name that I don’t even think about it anymore. Probably new readers just think it’s a quirky name, or that I’m weird, or both. Both have some truth.

It’s more than a quirky name, though. It goes back to when my mother, in her dementia, was putting marmalade on everything. She would gaze lovingly at the jar of marmalade on the counter, placing her hand on it, like it was a long-lost friend. She put a layer of marmalade on casseroles, on leftover Chinese food, on ham sandwiches, and, yes, on hot dogs.

I tried to think what blog title I would choose now, as I care for my father. Here are two of my thoughts:

But I’ll stick with Hot Dogs and Marmalade — salty and sweet — like life. 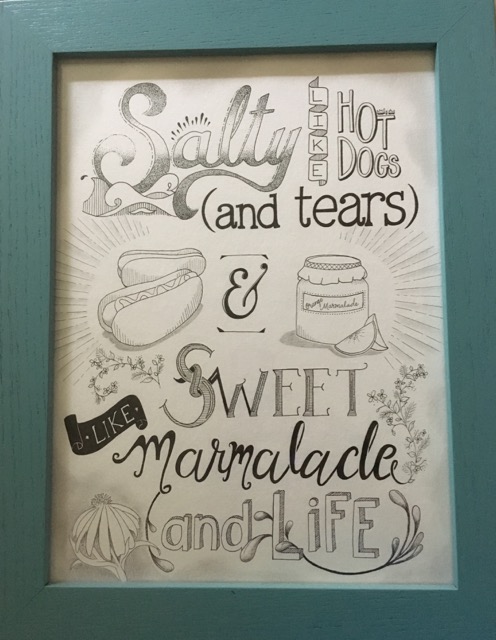 Trying to inspire myself to write more, I found this blogging challenge on Livelovesimple.com. I’ll give it a try for June.

← Change
The People in My Life →

8 Comments on “Vodka and Ho-hos”