Where the Wild Things Are

Partly because Sam just sent me this awesome collage postcard from Hawaii: 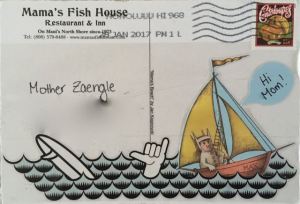 Is that me waving from the surf?

And partly because the Fenimore Art Museum recently announced that in April they are opening an exhibit called:
50 Years, 50 Works, 50 Reasons. Maurice Sendak: The Memorial Exhibition

I’m reposting something I wrote in May 2012.

As a side note — I DO do New York City now, very sparingly. By bus.

When I stopped to see my mother on Tuesday, she was in New York City.  Well, not literally, but, they were having another travelogue for the residents.  Instead of Hawaii, however, this week’s destination was New York City.

I don’t do New York City.  Every time I’ve driven someone to JFK, I’ve gotten lost, not getting there, but getting out.  I’ve ended up in downtown Manhattan on more occasions that I care to think about.  I am a country bumpkin through and through.  I don’t do big roads.  I don’t do big cities.

But my mother was in New York City in the safety and comfort of  The Manor.  Maybe I could handle that.

Anyway, I didn’t get to see her.  My kids said, “She won’t know the difference anyway.”

Maybe that’s true, but I know the difference.

Since Maurice Sendak died, I’ve been thinking about Where the Wild Things Are.  Little Max is so naughty that his mother calls him a wild thing.  He’s not even remotely contrite about his naughtiness, yelling at his mother, “I’ll eat you up!” So she sends him to his room.

And off he goes, not only to his room, but to where the wild things are, and where he’s king, and where there are wild rumpuses and such.  But he wants to be where someone loves him best of all.

She tiptoes into his room, but he’s not aware of it because he’s off where the wild things are.  She leaves him a tray of food, a tray that says I’ll always love you.

She didn’t do all that so that Max would see the tray and say, “Wow, my mother loves me.”  She did it because she loved him.

That’s what I want my children to know.  I don’t go visit my mother because she’ll understand.  I go because I understand, and because I love her.

So I stopped in to see my mother the other day, but she was off where the wild things are — New York City.  I should have left her a tray of food.

And it was still hot.

11 thoughts on “Where the Wild Things Are”