The other night at dinner one of my children was talking about his goals. My daughter-in-law asked, “Are you talking about goals, objectives, strategies, outputs, or outcomes? They’re all different, you know.”

I messaged her this morning to ask her to list them again and then I started looking up the differences.

Most of the websites that define the terms are about grant-writing — which makes sense because Emily writes grants for her job.

I read through several websites. As best I can figure out,

I smiled and nodded as I read. I understood, but the hard part is application.

So I decided to tackle just one goal à la Emily the grant writer.

GOAL — to keep my father home.

The top story in today’s newspaper cemented that: 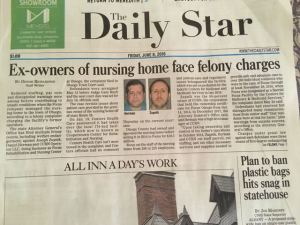 This happened in the nursing home where my mother had been. I get a pit in my stomach when I read these stories.

My goal, though, is to keep my father home.

OBJECTIVE — Live in the same house with him.

STRATEGY — Move to Cooperstown. I know many people move their parent(s) in with them, but, for a number of reasons, this wasn’t the best option for us. I moved here in 2015 with my two youngest daughters and we hoped that my husband would soon join us.

This house had become the repository for many family members. In order for us to live here, we had to clear stuff out.

But there’s still a long way to go.

OUTPUT —We’re here and my father is here.

We’ve reclaimed rooms in the house so the kids have space that is theirs. I’ve slowly whittled away at stuff that has accumulated here. Two loveseats went to the curb a few weeks ago and were quickly taken. I’m making headway with the boxes of papers. We still have more to go, but we’re moving in the right direction.

After being a frequent flyer at the Emergency Room for chest pain, my father’s doctor and I came up with a strategy. She told me to 1) Sit him in his recliner with his feet up. 2) Check his blood pressure. 3)DON’T take him to the ER for at least 2 hours unless his numbers look bad. The first few times were rough — he was very insistent that he needed to go, but with his BP, pulse, and O2 all normal, I told him that we needed to wait. Each time whatever it was passed and he went back to bed. We’re making progress.

OUTCOME —My father is still home. It’s not so much a change as standing our ground.

I think that’s an accomplishment. It’s not easy. It’s hard on everyone, but as the doctor we saw today said, “I would do anything for this man.”

My father is that kind of person. Having lived a generous life, he should be able to reap some of what he has sown.