Frederick Buechner, in his book, The Remarkable Ordinary: How to Stop, Look, and Listen to Life, explained the haiku better than I have seen it explained before:

The whole genius of the haiku is that they don’t mean anything. People who try to figure out what a haiku means are beating up the wrong path… The haiku settles for doing, as I read it anyway, one very simple but very crucial thing — it tries to put a frame around the moment. It simply frames a moment.

Since I was a child, I can recall pausing and thinking, “If only I can remember everything about this moment forever.” My everythings ranged from listening to my mother cook in the kitchen, seeing the rainbow circles around the lights in the pool after swimming without goggles, the raucous cawing of crows for no apparent reason, the smell of freshly cut alfalfa, the toad in the garden that startled me when I was weeding, and so on. If I had known that the haiku served that purpose, I might have worked harder on my haiku-ing.

Today’s prompt, Planet, got me thinking about all the times I tried to see the planets as my brother pointed them out to me. He can read the night sky so well. (He even knows zombie and wolverine constellations that nobody else does.)

I would squint and try to follow his finger to the tiny red dot that he said was Mars. Sometimes I saw it, but often I didn’t.

How could I write a haiku about that time I didn’t see Mars?

Then I remembered his favorite marble, a small blue glass orb that resembled planet Earth.

When we played marbles, I could barely balance the shooter marble on my thumb in order to plink it into the ring. If his Earth marble was in play, though, that was the target. Winning that one meant winning everything. 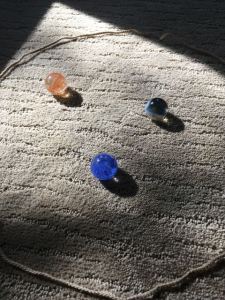 ← Family Picnic
At the Window →