A is for Appetite (Or, 5 Things About Zombies)

Please forgive this post. I blame it on my brother and the fact that I’ve been struggling to write.

“Why don’t you write ’10 Things About Zombies’?” my brother suggested.

“I don’t know ten things about zombies,” I said.

“Make them up,” he said, but I couldn’t think of anything.

“Zombies are dead,” I told him.

“You need to come up with something more interesting,” he replied.

I came up with five facts, but the first one is really a correction.

Zombie Fact #1: Zombies are not dead; they are undead.

Cee Neuner is starting a weekly photo challenge called “Alphabet with a Twist.”  For the next 26 weeks, she’ll feature a different letter ~~ with a twist ~~ for her Fun Foto Challenge.

Maybe it’s because I’m a little twisted myself — but, I felt like I could commit to this challenge.

A (with a twist) is Ap. The photo needs to feature something that begins with the letters “Ap.”

I’m adding my own second requirement for this challenge. I’m going to use old family pictures.

Zombie Fact #2: Zombies don’t like to be photographed. Most zombie photos are staged and not real.

A few years ago, I started scanning my father’s slides to get them into a digital format. All of the photographs in this post were taken by my father before I was even born. Not staged. 100% real. No zombies.

Watermelon is red and juicy. If you look at zombie pictures (which I know are staged) they often have red juicy stuff running down their chin. Watermelon, while not the consistency of brains or flesh, looks appetizing enough to fool your average zombie.

My mother told me that watermelon was sometimes soothing for a child that was teething. I like to think that’s why she was feeding it to Stewart in this picture, but she may have kept watermelon on hand in case of zombie attack.

Zombie Fact #4: Zombies are delighted when they see a baby with food on his or her face.

Zombies really aren’t so different from the rest of us. What parent hasn’t taken a picture of junior with spaghetti on his head or chocolate ice cream smeared all over his face?

For zombies, though, they find it attractive because they identify with it. Most zombies have lost their swallow reflex. Remember the zombie pictures with red liquid dripping down their chin? Well, they can’t help it. Their swallow reflex died with them and didn’t come back to life. That’s why they talk the way they do. That’s why they eat the way they do. When they see a baby with food all over his face, they think he’s one of them. They feel a kinship.

This can actually be used to a family’s advantage when under attack. Hold the food-covered baby in plain view while the rest of the family slowly backs out of a room invaded by zombies. The zombies will be so enamored that they won’t attack. Once everyone is out the room. Shut the door and run.

This is a picture of my mother feeding Stewart. 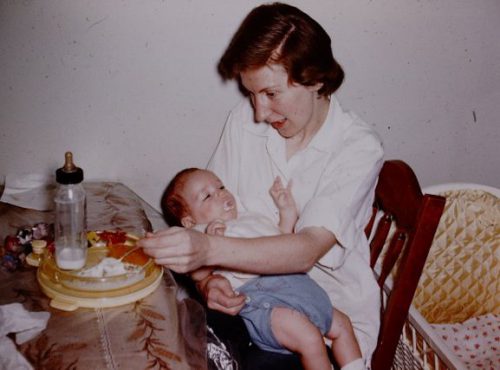 He doesn’t have anywhere near enough food on his face to distract zombies. It’s okay. He lived his whole life without a single zombie attack.

My mother and my oldest brother have both passed away but they will never be zombies, because —

Zombie Fact #5: A person who lives a life of service to others can never become a zombie.

My mother and my brother both gave freely and generously of themselves. It’s like a zombie vaccine.

This should serve as a reminder to all.

We should be kind.

We should be generous.

We should put others first.

— if for no other reason than it will keep us from being zombies.

← There’s No Place Like Home
Fun With Google Translate →

7 Comments on “A is for Appetite (Or, 5 Things About Zombies)”