G is for generations.

I wanted so badly to have Philip meet my grandfather, my father’s father. He was a great guy.

Bud and I had made a trip home that fall when I was pregnant, but that was the last time I would see my grandfather.  On the next trip, when Philip was 6 weeks old, we attended my grandfather’s memorial service.

Nana, my father’s mother, was still alive, but she was quite ensnared in the web of Alzheimer’s. Still, there’s something about holding a baby that reaches beyond those cobwebs, and touches something deep inside.

Babies are magical beings with superpowers. A sleeping baby brings calm to a turmoiled spirit. A smile from a baby can soften the hardest heart, and a giggle can melt a glacier.

I’ll never forget when Philip brought his little boy, Henry, to meet my mother. My mother rarely smiled toward the end. Not real smiles that reached her eyes, anyway. She still occasionally laughed, but that usually bled into tears, and it was for strange things, like a recitation of Paul Revere’s Ride.

But Henry — Philip gently placed Henry in my mother’s arms and still held his hands there to support Henry lest she forget. He was so tiny at the time.

My mother gazed down at this tiny creature who snuggled against her bosom. Instinctively she patted his back, and then looked up at us with one of the best smiles in a long, long time. 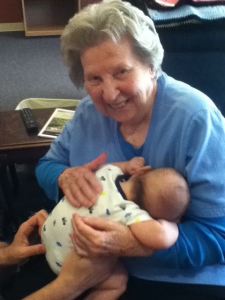 My father has that picture out. He looks at it periodically.

“Look how happy Mom is there,” he’ll say.

Henry will never remember that day anymore than Philip would have remembered meeting my grandfather if things had worked out.

But I’ll remember my mother’s smile that day.

A smile is a good thing to remember.