T is for Threshold.

Since I had been to Laity Lodge the previous year, I knew where to head as soon as I arrived.  A place called Threshold.

Last year I spent a lot of time inside Threshold. I sat on the cold stone seat. 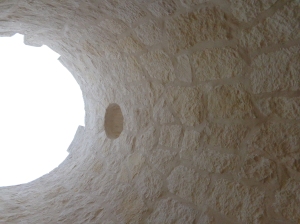 This year, when I went in, I found myself looking out. 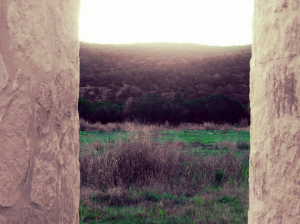 I sat outside and looked in.

I went early in the morning, before dawn, and looked at it in the dim light.

I tried to take pictures of the sky, which was clear and blue-black and star-studded, or star-spangled, or star-strewn. You get the idea. But all my star pictures look like this. 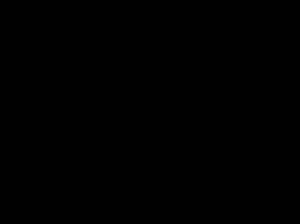 I think I need a fancier camera.

Because the memory of those stars is etched in my mind.

I spent a few feeble minutes trying to take a picture, but I spent hours, literally hours, sitting on a chunk of limestone and looking up at the twinkling luminaries of the night.

“Why do stars twinkle?” Laurel asked the other day.

“So we can sing songs about them,” I told her.

She was looking for the scientific explanation and read to me from her science notebook.

The stars twinkle because the air over our heads is turbulent and as it blows past, it distorts the incoming light from the stars making them appear to slightly shift position and brightness level in seconds…

I think they twinkle for the songs.

Especially in a Texas sky.

Category: A to Z Blogging ChallengeTags: Blogging from A to Z, Laity Lodge, photographs, photography, stars