U is for Unexpected.

I got a text last night with no name, just the following message: “It’s Thursday. Doing my drive-by. Love your stalker.”

Crap, I thought. Has Joan Jackson resorted to driving by and texting me? I have my posse of good-deed vigilantes taking action when I hear from her and wondered if I needed to contact them.

Helen called the number, though. “I don’t think it’s them,” she said. “Call and listen to the message.”

I did… and recognized the voice. Of a friend. 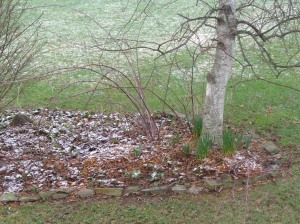 Yesterday and again today, I woke up to see snow outside. Snow. After 70 degree weather and green grass and crocuses. Unexpected snow. In late April.

The other day I happened to be driving on Rte 20 in New York and saw a sign for the place my daughter-in-law works. Although I was on my way somewhere else, I turned in to see her. Unexpected. It was a delight to see her and the place she works.

At Laity Lodge, on one of my pre-dawn trips to Threshold, I noticed a light, an artificial light, in the castle. I  didn’t want to startle the other visitor so I stuck my head in the entrance and said something like, “I didn’t want to scare you, but I’m up here, too.” Then I went and sat on a chunk of limestone outside and watched the sun rise. I’m quite sure I was unexpected.

On another visit to Threshold, I was surprised by another living thing there.

I was lost in reverie, thinking on who knows what, when a nearby movement startled me. It was a beetle, which, of course, put me in mind of A. A. Milne.

Heraclitus said, “If you do not expect the unexpected, you will not find it…”

Oh, Heraclitus, walk with me for a day. I’m surrounded by the unexpected.