D is for Dermatology

“What kind of medicine did you practice?”

The still-wet-behind-the-ears spring-chicken doctors who have never met my father before always ask it.

What they don’t understand is how much medicine has changed in the past fifty years.

Fifty years ago, when my father left the military and settled in Cooperstown with his family, his job title was Head of General Services. General Services included the emergency room, the ambulatory clinic, and medical clinic. Basically, it was everything except OB/GYN, pediatrics, surgery, and radiology.

Back in the 60s and 70s, many doctors didn’t specialize the way they do today. They practiced medicine. The vast majority were probably what we would consider primary care providers today. Doctors followed patients their whole adult lives — or maybe it was the other way around.

As a side note, in addition to General Services, as if that wasn’t enough, my father was the medical director at the county nursing home (then called the “county infirmary”) and also oversaw public health.

As the giant centrifuge of medicine spun and spun, doctors began to be sorted out based on specialized interests. Bassett Hospital fostered learning and encouraged doctors to pursue their interests. My father’s was dermatology.

The dermatology nurses were the first to arrive at his party last month. Obviously, they adored him.

One dermatologist sent us this note (with his regrets that he couldn’t attend):

Don was one of the major reasons I came to Bassett in 1995. We talked at length by phone on several occasions, and during my recruitment visits. Don embodied everything that was appealing and excellent about Mary Imogene Bassett Hospital. He always cared so much about his patients, and all of Bassett’s patients. He was curious about their problems and committed to practicing excellent medicine. He was kind, concerned, and practiced “patient-centered” care long before the term was coined… I was very fortunate to have been able to learn from Don, and work with him as a colleague for several years before his full retirement. 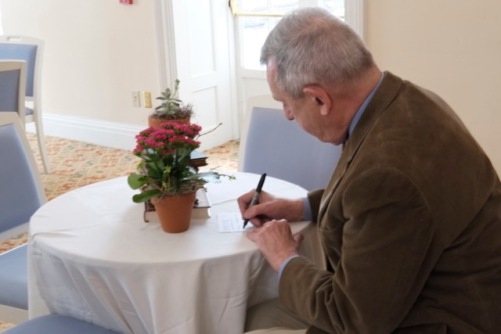 Finally, he looked up, saw me, and said, “I want you to know this story, but I don’t think I can do it justice writing here and now. Can I just tell it to you?”

Of course I wanted to hear it. I’ll retell it as best I can remember (the places may not be correct, but the gist is there).

Before we had a dermatology department, we sent all the derm patients to your dad. He was very good.

Once, I had a patient with a peculiar skin problem. He was one of the “uppity-ups”, you know, from the city. Anyway, this fellow asked if Bassett had a dermatologist, and I told him no, but we had someone on staff who was very good. That wasn’t good enough for this patient, so he went to see the head of dermatology at Columbia. Well, that guy couldn’t help him.

About six months later, I saw the patient again. He still had the problem and asked again if I could recommend someone. I suggested your father, but he went instead to see the chief of dermatology at the Mayo Clinic. This guy was world-renowned, you know, and he didn’t know what the problem was either.

The next time I saw the patient, he was getting ready to fly to Germany. The best dermatologist in the world was there and had agreed to see him. No luck again. The Grand Poobah of Dermatology did not know what it was.

Finally, the patient came to me one last time and asked about seeing your father, and, of course, your father correctly diagnosed him and treated him.

My father more than “dabbled” in dermatology. He was pretty darn good.

Humility keeps him from saying that — so I will.

Category: A to Z Blogging Challenge, About My Dad, familyTags: atozchallenge, Blogging from A to Z

← C is for Cunningham
E is for Eggs →

8 Comments on “D is for Dermatology”