In preparation, I had focused on the tired parts of the day: the getting up before 4 AM and the getting home after 1 AM.

I was worried about the city, all those people crowded together and the tall buildings holding them in, a barricade between city and country, urban and rural, not home and my home — and I was spending a day on the wrong side of the barricade.

I braced myself against the day instead of leaning into it.

I felt like you, who had never been to the city before, should be going with someone who loves the city and that’s not me — but you wanted me to go so I figured I’d better make a good effort.

“What do you want to do?” I had asked you. We had several hours to kill on either side of Dear Evan Hansen.

“I dunno,” you replied, in that helpful way you have.

So I worried about that, too, and finally decided we should go to the New York Public Library. You love books. I knew that if it turned out to be just a bunch of books you would be thrilled. You would pull the oldest book you could find off the shelves so you could hold it in your hands, feel the paper, and smell the old book smell. I’ve seen you do that.

The library was the right choice. You reached up to touch one of the stone lions that guarded the main entrance.

Inside, I touched the Lego lion that guarded the entrance to the children’s room. 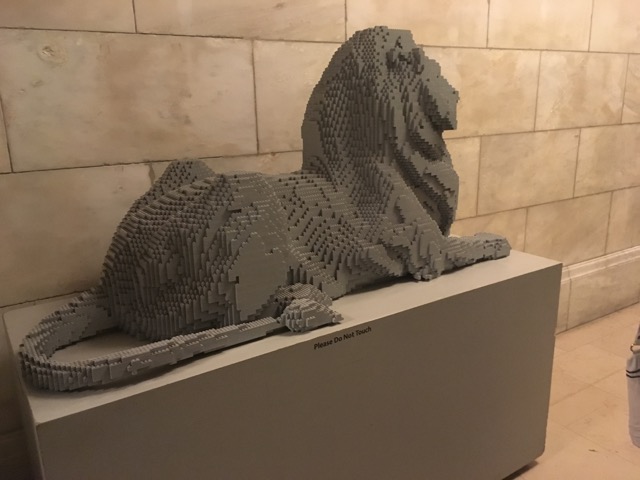 But what a magnificent place! You wished you could climb up the ladder to the second tier of books that ran the circumference of the study room. I wished I could have seen the original card catalog where now tables of computers sit, the card catalog’s modern replacement.

We walked the long hallways, climbed the marble stairs and admired the art work that was everywhere.

As we were leaving, we noticed a sign for tours of the library. Our 2 hour visit served as a peek — there’s so much more, I’m sure. Next time we’ll have to take the tour.

Did I just say next time? Next time?

After spending some time there, I kind of want to go back. We should do that, don’t you think?