The Journey of Tuga and Aleluja — part two

Tuga and Aleluja accompanied me to Bosnia this summer. At every place I stayed, I set them on the window ledge or my nightstand to remind me that every single person I would encounter on this trip has known both joys and sorrows..

Before traveling, I tried to read up on Bosnia, which turned out to be learning about Yugoslavia, which led to an attempt to understand the Ottoman Empire. The history of that land is layered and complex.

While the United States divides itself along racial lines, Bosnia and Herzegovina is divided along ethnic lines, and religion is often linked to ethnicity: most Bosniaks are Muslim, Serbs are Orthodox Christian, and Croats are Roman Catholic. Places of worship in Bosnia, though, have stood side by side for centuries.

The wars that resulted in the break-up of Yugoslavia took place along those ethno-religious lines. The BBC documentary, The Death of Yugoslavia, begins its story with a rise in nationalism following the death of Tito.

The war in Bosnia was particularly horrible. Serbs slaughtered Bosniak men and boys, throwing their bodies into mass graves. The Bosniak women were systematically raped. Although it has been 25 years since their war, the scars are not fully healed. Fragments of bone are still being analyzed and those murdered are still being identified. In fact, we were in Bosnia for “Remembrance Day” — a day set aside to remember, to mourn, and to lay to rest those remains that have been found and identified in the previous year.

As we toured Sarajevo, we saw the site of the assassination of  Archduke Franz Ferdinand of Austria, the event that triggered World War 1. 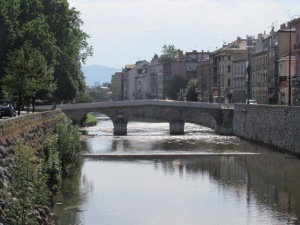 We stood outside the library and I felt sick in my heart as I tried to understand what part of a war involved burning all the books and historic documents that had been housed there.

Sarajevo Roses dotted the streets. These commemorated places of fatal mortar strikes — red resin filling the scars left and plaques on nearby buildings with the names of those who died.

Parks became cemeteries because they had no other place to bury the bodies. 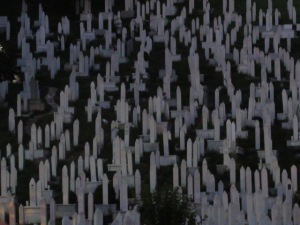 Just months before I had visited several cemeteries in Normandy. Any cemetery is a sobering place to visit, but these war cemeteries were especially heart-wrenching. The cemetery in Sarajevo stood out because these brave young men were my peers.

“In the midst of life, we are in death.” (Book of Common Prayer)

From the start, Amy, the pastor organizing the trip, had said this was a non-proselytizing trip. In the context of Bosnia’s history, it made sense that this trip would not involve talk of religion. We were to be the hands and feet of Christ, ministering to the people of a wounded country. Our actions were our words.

I had an advantage over the others on the trip. I had a little bunny to remind me of the sorrow.

2 Comments on “The Journey of Tuga and Aleluja — part two”