The Journey of Tuga and Aleluja — part three

Our work in Bosnia took place in Gradacac, a city about 3 hours north of Sarajevo.

Ostensibly, we were there to build a house.

Every morning we drove to the work site in two loads using a car lent to our group by a family for whom a house had been built by a previous team. We were a little cosy in the Peugeot station wagon but it got us back and forth on the narrow windy roads. 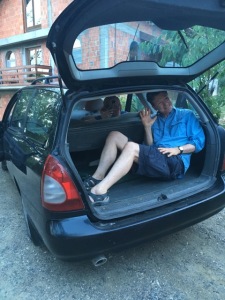 I asked Amy what the family who lent us their car would do for transportation that week.

At the house, the work were directed by maestros, some older experienced builders.  Initially I’m not sure they trusted the skills of the Americans. Our men-folk were tested by wiring together lengths of rebar.

Eventually, we all got to try our hand at rebar-wiring.

Some got to do a little masonry.

Most of the time, though, while the skilled laborers worked, we waited for tasks we would be allowed to do.

We told them about our families

and about our lives. 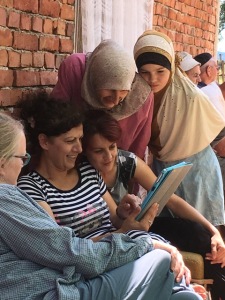 We tried to learn some words in Bosnian.

And they practiced their English with us.

In the evenings we were regaled with music and food. 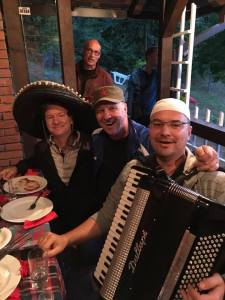 Significant progress was made on the house.

But I’m convinced that the real mission work took place in the realm of relationship.

On our last day there, we went back to say our good-byes. The families had been so incredibly generous to us. I wanted to give them something in return.

I had brought some bracelets made by women in Haiti. When one of my friends had been raising money for an adoption I bought them from her. 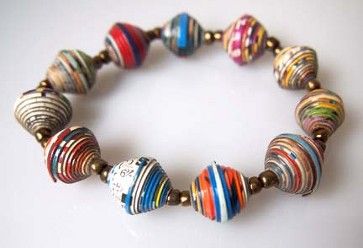 These I gave to some of the women. I asked our translator explain that these were made by women from another part of the world who were looking for ways to provide for their families. I told her to tell them that women all over the world can support each other in small ways like this because we understand each other’s struggles.

Then I took Tuga and Aleluja from my pocket. How could I possibly explain these little bunnies?

“In our religion,” I told the translator to tell Hanka, the woman I wanted to give them to — a woman who had shared her concerns about mental health in Bosnia, and how there was very little support for it, “we have a season called Lent. It’s a sad time. Jesus, who we believe to be the Son of God, knew He was going to die.”

I struggled to know how to express what I wanted to say — and, truth be told, I don’t remember exactly what came out of my mouth. I do, however, remember inwardly praying, as the lump rose in my throat, and I looked at the two rabbits sitting in the palm of my hand.

“I named these rabbits Tuga and Aleluja,” I said, and I looked at her to see that she recognized the words.

“Tuga means sorrow, right?” I asked, and she nodded. Her eyes were filling with tears, as were mine.

“Aleluja is a joyful word that we don’t say during Lent, so I hid this rabbit away.” I stuck the white rabbit behind my back. “But I put Tuga in my pocket and carried him with me everywhere, to remind myself that people all have sorrows hidden in the hearts.”

I looked at Hanka while the translator translated my words. I hoped it was making sense. Hanka kept nodding to show that she understood.

“All during Lent I carried Tuga and I thought about the deep sorrow of the world, but on Easter, the day that Lent ends because Jesus rose from the dead, I got Aleluja out from his hiding place and we were joyful again.”

I paused again, listening to the flow of Bosnian, hoping it was close to the essence of what I was trying to say.  When the translator was done, I handed the rabbits to Hanka.

“I want you to have these,” I said, “because you know that people carry sadness in their hearts. Tuga reminds you of that, but Aleluja also reminds you that there is joy in the world.”

She nodded and hugged me. We were both crying.

My friend Leah, who had followed the posts about Tuga during Lent and was also on this trip, saw what was going on. “Is that Tuga?” she asked, and then she offered to take a picture of us.

I like to picture Tuga and Aleluja sitting on a window ledge in Bosnia, doing whatever two rabbits can do to remind us of God and of tenderness and of compassion in this world.

It was an unplanned ending for my rabbits’ journey, but it seemed a fitting one.

← The Journey of Tuga and Aleluja — part two
Every Moment Holy: When Something Is Lost →

One Comment on “The Journey of Tuga and Aleluja — part three”