This was my third year participating in April’s A-to-Z Challenge.

In 2015, I posted mostly about a trip to Laity Lodge in Texas, and, in 2016, I wrote mostly about caring for my aging parents. I say “mostly” for both of those because I wandered on a few posts. Despite that, I survived and succeeded in posting through the whole alphabet.

For 2017, I decided to share a little of my “art” — collages I make from worn-out children’s books. 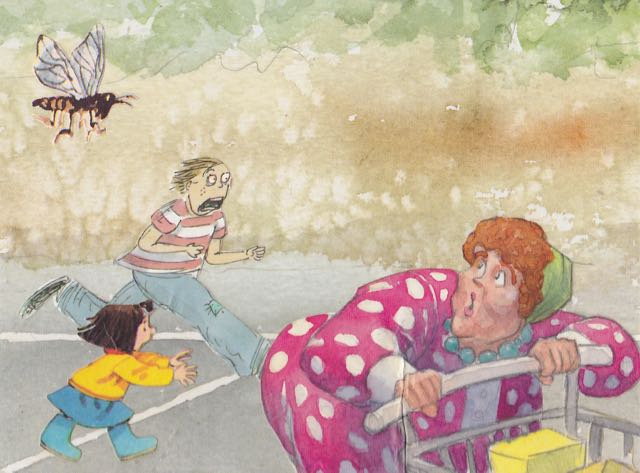 Sharing art is risky and scary.

It’s like dealing with bees. What if they sting? What if I get hurt?

But it’s also like bees, in that the rewards can be sweet. Affirmations can be like honey.

So, first, I’d like to thank all the good people who stopped by and said a few kind words, or even just hit the “like” button. You’re wonderful. You’ve been good for my soul.

Second, I did find it significantly harder this year to connect with other A-to-Z-ers. I felt like I was trying to post my link in a bunch of different places and it became cumbersome. Cumbersome to link, cumbersome to look.

Some blogs that I did discover (and love) were Finding Eliza (about research and family history), Hawwa’s Mail Adventures (featuring real, honest-to-goodness snail mail), Miss Pelican’s Perch (who used the challenge to overcome writer’s block), I Just Have to Say (who wrote about her favorite things, many of which were also MY favorite things), and, my favorite, Iain Kelly (who wrote an action-packed serial murder mystery using a children’s puzzle for inspiration). Some I had already been following who did the challenge were Vanessence and Manee Trautz. There were others that I stumbled through and can’t recall their names — someone sharing drawings every day of Disney characters, someone writing about spirituality. Forgive me if I’ve forgotten.

Third, to the organizers of this mad affair, thank you. Yes, it was different this year — but if I hadn’t done it previous years, I wouldn’t know the difference.  And the bottom line is a bunch of people blogged regularly for the month of April. You encouraged that. You facilitated that. You deserve a round of applause. Thank you.

Background from Each Kindness by Jacqueline Woodson, illustrated by E. B. Lewis

Woman from My Dad’s Job by Peter Glassman, illustrated by Timothy Bush

Boy from Meet My Staff by Patricia Marx, illustrated by Roz Chast

Category: A to Z Blogging ChallengeTags: atozchallenge, Blogging from A to Z, collage, Postaday