I began at the end, with my mother’s dementia. Now I’ll end at the beginning of my mother’s life.

The zero before the one-two-three.

That space the game token rests on before the first roll of the dice.

My grandmother gave the family a great gift when she wrote her autobiography. Through that, I know the following:

My great-great grandfather was a chimney sweep.

My great-grandfather was a bushelling tailor who, “did not make suits, but refitted and repaired them.” He came from Denmark in 1892, found a tailoring job, and then sent for his family. 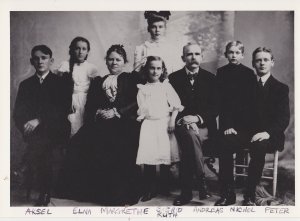 My great-grandmother came over steerage with four children. She couldn’t speak any English. My grandmother still remembered the name of the woman who taught her mother English. Lydia Buxton, may your descendants be blessed.

My grandmother and her brother were born in a tiny house in an alleyway in Beverly, Massachusetts.

My great-grandfather took in dry cleaning for extra money. My grandmother and her brother delivered clothes for him. One of her sisters worked for him every afternoon and sometimes all day Saturday. Still, they struggled to make ends meet. My grandmother wrote, “My father sometimes had to wait weeks for his money from wealthy people who would not take the time to write a check. My father would have to ask the coal dealer to wait until he received pay for his work.”

But they made sure the children went to church and to school. They had music in their lives. Piano. Violin. Choir.

My grandmother had wanted to become a teacher, but there was no money for “Normal School,” where high school graduates could be trained to become teachers. So she took a job as a switchboard operator for the Woodbury Shoe Co. and earned $6 a week, two of which went to her father for room and board.

She met my grandfather at church. A church group gave her a surprise 16th birthday party, and my grandfather and his twin brother argued over who would get to take her home. She couldn’t tell them apart at the time.

He had stopped school in the 11th grade to take a bank job.

They married and had four children. My mother was the youngest.

She was a little girl who loved to catch snakes and would stand up to bullies.

When she grew up, the bully she held off wasn’t named Normie, but was named Alzheimer’s.

Doing this A-to-Z Challenge in her honor has been fun.

Thanks, Mom, for everything.

← Yuck
The Wreck of the Eliza →