Laurel has been practicing cracking an egg with one hand — with these: 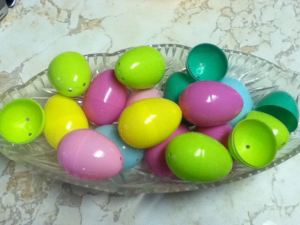 “Please can I try it with a real egg?” she begged the other night.

“No,” I replied. I was tired and the likelihood of having to clean up an egg mess was unappealing.

“But, look,” she said, holding a green egg in one hand, “I can do it,” and she neatly opened the empty egg.

“No,” I said again. “Do it in the morning when I have more energy.”

The truth is I had gotten sad the day before when I was making waffles for my father. I had used the recipe my mother used to use.

But it calls for separating the eggs.

Every time I do it, whether I’m using the separator, the shell, or my hand, I start thinking about my mom.

When her dementia robbed her of her cooking ability, she was so lost. No more cooking for a crowd. No more delicious soups where she put something akin to magic in the pot. No more casseroles.

Food was whittled down to marmalade. On everything.

But I can still eat marmalade.

There’s just something about eggs. They make me think of her.

An egg is both strong and fragile.

But the word “egg” only appears once in the Bible.

Somehow, for me, an egg inextricably connects mother to daughter.

It is a mystery — a pearly, porcelain, alabaster mystery.

Today, I’ll let Laurel try cracking that egg with one hand. Success or failure, we’ll laugh and then figure out what to do with the eggs she opens.

Maybe someday she’ll look at an egg and think of me.