John 5 begins with the story of Jesus at the Bethesda pool where lay “a multitude of invalids.” The belief was that after an angel troubled the waters, the first one in was healed. Jesus spoke with a man who had been there for thirty-eight years.

“Do you want to be healed?” Jesus asked him.

“Sir, I have no one,” the man replied. No one to put him into the pool when the water is stirred. A multitude of invalids, but each concerned for himself.

To have no one.

C is for Community.

My father and mother enjoyed traveling after my father retired, but as my mother’s dementia grew worse, traveling became more difficult.  One night in New York City, my father awoke to hear the heavy hotel door click shut and realized that my mother was no longer in the room. He found her in the hallway. Another time she got away from him at the airport, and still another time she wandered off in Greece.

On that trip to Greece, their last big trip, the other ladies in the tour group saw the need and began watching out for my mother. What began as a group of strangers ended as a caring group. 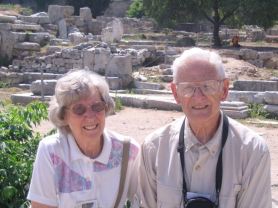 My mother and father on their trip to Greece 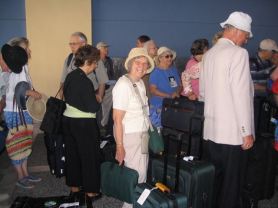 Strangers at the start, friends by the end

“Without a sense of caring, there can be no sense of community.”  Anthony J. D’Angelo

Community doesn’t have to be intimate to be functional.  Even a small thing, like holding the door open for someone struggling with mobility, can be an act of community. It says, “I am willing to help you, even if it inconveniences me a little.”

Sometimes community is very intimate. I was horrified to see that my mother had had an incidence with incontinence while visiting an old friend of my father. “Oh! I’m so sorry!” I had said when my mother stood to go. “Let me get something to clean that!”

“No, no,” the woman had said. “Your job is to take care of your parents. I can clean this up.”

Looking out for one another.

Circling the wagons in Greece, in Florida, in Cooperstown.

We can be community to those we encounter. We just need to be willing.

My father and I went to dinner at the Council Rock Brewery last night for their Friday night fish fry. If you should ever be so fortunate as to spend a Friday night in Cooperstown, by all means, go to Council Rock for dinner and a beer.

Chardonnay (for me) and beer (for my dad)

The what’s-on-tap list was long and my father hadn’t looked at it before the waiter came to take our order.

“Would you like a dark ale or something lighter?” the waiter asked, his pen poised over his pad.

One of my father’s hearing aids isn’t working right now.

The waiter looked at me, unsure what to do next so I pushed the list over to my father and repeated the question.

“He wants to know which of these beers you want,” I shouted so he could hear me above the pub hubbub.

The waiter bent over the table and put his finger at the bottom of the beer list. “These ones are dark,” he said, “and they get lighter as you go up.”

My father furrowed his brow as he studied the list. He finally pointed to the second beer from the top. “I’ll try this one,” he said.

When it was served, my father said, “That’s the right color.” He took a sip and pronounced it good.

I was glad he was happy with what he had ordered.

When my mother was early in her Alzheimer’s, I remember going to restaurants with her. She wasn’t hard of hearing, but she did struggle to order. She studied the menu, chose something, announced her choice to us, but then would have forgotten it by the time the server was taking her order.

Sometimes she ordered what the person before her had ordered.

Sometimes my father or I ordered for her or prompted her with what she had intended to order.

Drinks were a different story. When ordering drinks, she usually declined — which was fine. But when the server brought out drinks for people and brought nothing to her, she grew indignant.

“Where’s mine?” she would demand.

The flustered server would apologize and ask again what she would like.

We would offer our drinks to her.

Anything to make her happy.

Because the maxim, “If Mama ain’t happy, ain’t nobody happy” is still true when Mama has dementia and is at a restaurant.

At the neurologist’s office one day, after a failed clock assessment, a sign of dementia, I asked the doctor, “What can I do? How can I help?”

He said, “Be patient. Be understanding. Be kind.”

We all need to live by those B’s,  even without the presence of aging or hearing loss or fogged thinking.

So B is for beer.

And the above-listed B’s.

Not just in restaurants, but everywhere — at home, in the store, at church, on the road, in political discourse.