W is for Work

“Compulsive” — That’s the word my father used to describe himself when I asked him about the detailed lists he kept of his expenses and his earnings.

I see proof that he worked very hard, even from a young age.

One year for his birthday, my sister gave him this framed picture:

My father and his brother had both worked at the Brookside Store — which was also a gas station — and was also the post office. And may still be a post office.

When my father went to college, he carefully calculated out all his finances.

He also, week by week, noted all his expenses and all his earnings. Here’s one page from that packet: 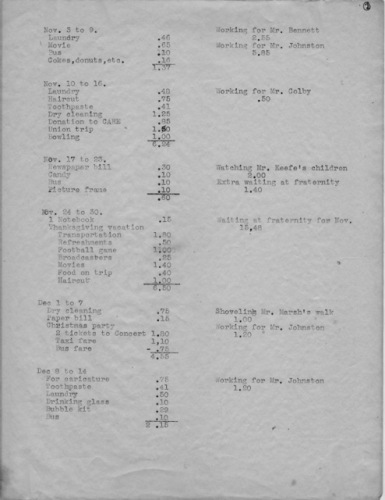 I asked my father about the names in the right-hand column. Many he didn’t remember, but Mr. Johnston’s name elicited a very warm response — “Oh, I remember Mr. Johnston! He was such a gentleman. He was always very kind to me.”

“Yard work or whatever they needed help with,” he replied.

“And ‘waiting at fraternity,'” I asked, “is that waiting table?”

The detailed pages bore witness to it.

“I was so compulsive about keeping track,” he said again, laughing.

I see all the work.

One thought on “W is for Work”