Just to confuse people, not far away in Hamilton, NY, is Colgate University, another small liberal arts school.

But, no — my dad went to Hamilton. As did my uncle. As did my oldest brother.

Hamilton College was so formative for him. He has nothing but good words to say about the school. Let me share, though, words that others have written to him about his Hamilton College experience.

As the first member of your family to attend college, you, followed by your brother, Stewart ’54, attained prominence in your chosen field and remain an inspiration to all, especially our “first-gen” students who comprise 15% of the student body.

Ben Madonia, Director of Planned Giving at Hamilton, came to visit my father last summer. Ben wrote a follow-up letter to my father, reminding him of the various Hamilton College-related stories they had shared. I thought it was a brilliant idea to recap the visit to help my father remember. Of course, I can’t find that letter to include an excerpt, but Ben also wrote one for my father’s birthday celebration.

… You and Elinor were among the first to greet and welcome us into the Hamilton alumni community at Achievement Day in August of 1980. We have been forever grateful to both of you for your kindnesses to us and for all that you have done for Hamilton.

In addition, you earned the admiration of your classmates, contemporaries, and alumni across the generations for your efforts and leadership…

He went on the mention my father receiving the Bell Ringer Award, one of Hamilton’s highest honors. Dad has that award framed and hanging in the dining room.

Melissa Joyce-Rosen, the president of the Alumni Association, wrote this in 2006:

You arrived on College Hill from the Garden State of New Jersey, took up residence in the upper reaches of the Chapel, and helped covered your college expenses with a job soon to become obsolete — ringing the Chapel bell…

Last fall, one of my father’s friends drove him to Hamilton College and he climbed the stairs of the bell tower once more.

Melissa concluded her award letter with these words:

You once observed of your Hamilton education that, “Most of the facts I learned have long been forgotten, but the values I learned and the vistas that were opened have enriched my life beyond measure.”

On a different note, my father’s brother Stewart, who also went to Hamilton, wrote my father some letters in 1953 that have been saved these many years. In one, Stewart thanks my father for his help at Hamilton:

… Don, I really appreciate all the help and advice you have offered to me, and I am especially appreciative for your helping to start off on the right foot at Hamilton. I’m sure that if you hadn’t been here during my freshman year, the succeeding years would not have been as profitable for me.

As Dad may have told you, I burst forth from my cocoon of academic ignominy this past semester with 6 straight A’s…

In another letter, my uncle said, “…You will always remain somewhat of a god in my estimation…”

So, for Uncle Stewart, I include one last Hamilton College letter that my father has saved for 70 years. It was in the same folder as the Glen Cunningham letter, and was written by Winton Tolles, Dean. 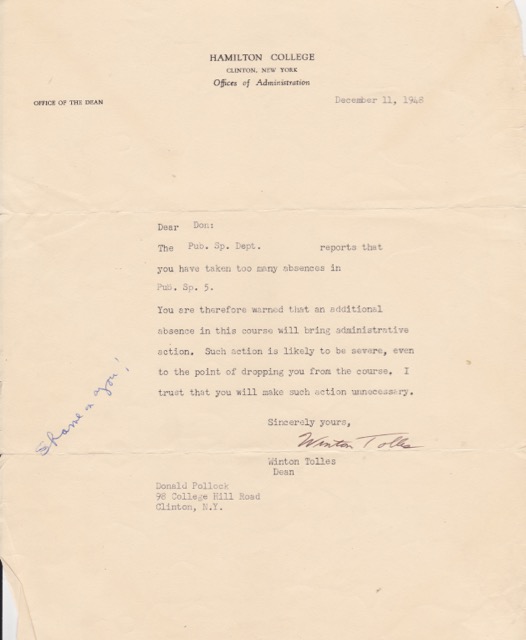 I don’t know who wrote “Shame on you!” but I can almost bet they were laughing as they did.

I laugh too, because amid all the accolades, my father saved an academic warning letter. Maybe it’s the only one he ever received.

2 thoughts on “H is for Hamilton College”