Subscriber of the Day 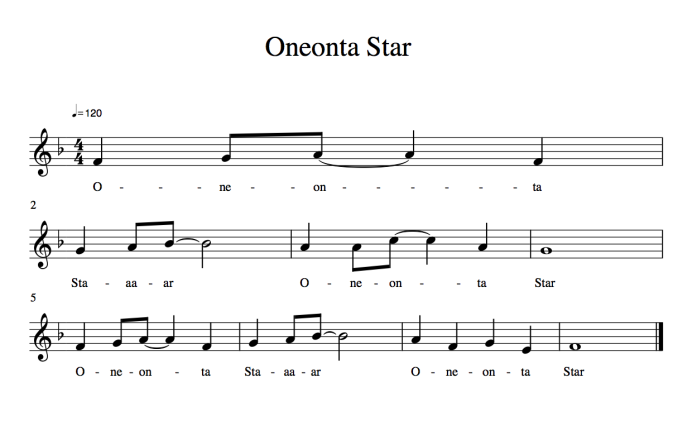 My youngest brother composed this song when he was a wee lad.

The daily newspaper that my parents read was called the Oneonta Star and one day my little brother burst into this song. It’s much better than my first song which was called “Freckle Face.” Lyrically, my song was more interesting (although a little disturbing), but overall, his was better.

Some of you may be shaking your head saying, “That’s not a city. That’s a town.”

Well, when Cooperstown’s population is only 1,812, Oneonta sure looks like a city.

The Oneonta Star eventually changed into the Daily Star. Old timers still call it the Oneonta Star, just as they still refer to the Price Chopper as the Great American, our local grocery store which changed hands close to 20 years ago.

My middle brother delivers newspapers for the Daily Star. He started when one of my older sons had a paper route and occasionally needed a back-up. My brother enjoyed getting up early and running the paper route. As he told me once, “It’s like getting paid to exercise.” It doesn’t pay terribly well otherwise.

But the people on his route love him. He gives them each a crystal for Christmas and then does little things throughout the year, like occasionally putting stickers on the papers to brighten their days — black cats and pumpkins for Halloween, hearts for Valentine’s Day, fireworks stickers for the 4th of July — you get the idea.

Last year, on my birthday, he put a Happy Birthday sticker on the front page. My father looked at it and said, “I wonder what the devil this is about. It isn’t my birthday.”

This year my brother added a bunch of stickers, to make the occasion unmistakable.

But my father didn’t say a word.

Every day, the Daily Star announces the “Subscriber of the Day.” My father comments on it frequently.

“I wonder what you have to do to get that honor,” he asks when he reads it.

The person is usually unknown to us because the Daily Star covers quite a large rural chunk of upstate New York. A few weeks ago one of his friends was named.

It’s a strange honor that seems so important to him. He always checks that name above the fold, and then scans the obituary names below the fold — “Just in case my name shows up,” he says, with a morbid humor that I appreciate less and less.

Today’s paper had many celebratory stickers. I wondered at the occasion — until I saw what my brother had surrounded with his stickers — the Subscriber of the Day, my father.

“Did you notice all those stickers?” I asked my father when he sat down to breakfast.

“These ones are pretty special,” I said. “Look.”

He peered at the newspaper, and peered some more. Suddenly a wide grin spread across his face.

“I’m the subscriber of the day!” he said, fist-pumping the air. “Hallelujah!”

← Shall We Gather At the River
God Bless the Moon →

7 Comments on “Subscriber of the Day”