My mother would sometimes say, “That hits the spot.”

Hot soup on a cold day. Ice cold lemonade on a hot day. Lasagne with garlic bread and a fresh tossed salad on any day.

The one identifying the location of the treasure, which, as it turns out, may be food.

Contentedness as seen in the perfect food for the day became more common with my mother’s Alzheimer’s.

Or maybe she was just more verbal about it.

So many things were confusing to her. The place. The year. The people around her.

Food, however, was and is universal.

And can be deeply satisfying.

Especially when it’s just what your body is craving. 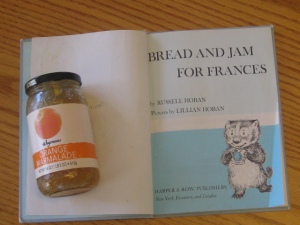 The way my mother ate orange marmalade reminded me of Russell Hoban’s Francis in Bread and Jam for Francis.

“Well,” said Frances,
there are many different things to eat,
and they taste many different ways.
But when I have bread and jam,
I always know what I’m getting and I’m always pleased.”

When the world is crazy, go with the sure thing — marmalade.

It will hit the spot.