Laurel started in the public school this year as a sophomore. Had I known that last year was to be my last year homeschooling, I may have grieved.

Life is busy and full and rich and keeps moving along.

I wanted to take one of those “First Day of School” photos that I see people post. But “ain’t nobody got time for that” is an accurate double negative. Some people DO have time for that — just not me.

Anyway, Laurel was rather nervous about starting school, and, therefore, rather uncooperative about a First Day of School photo. This was all I got:

So we have a new normal and a new morning routine.

Every weekday morning I join the throngs of parents driving their child(ren) to school. I follow the precise hand gestures of the sometimes-meter-maid police officer as he directs car past the elementary school. I wait in the line of cars to reach the drop off spot at the high school.

After I drop Laurel off and I start driving home, I think about the bakery.

This is a true confession here. 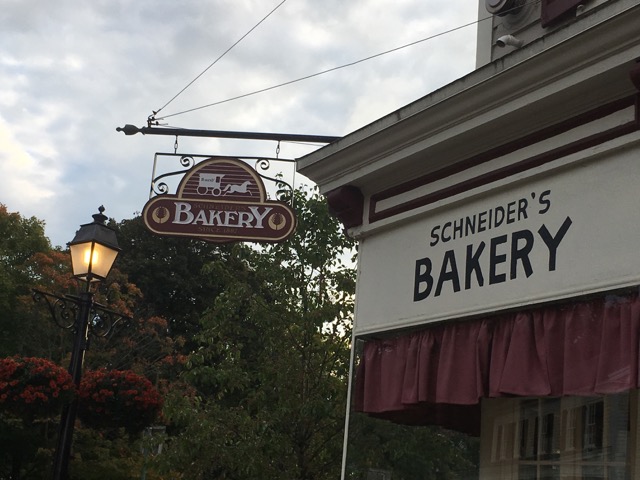 I love Schneider’s Bakery in Cooperstown.

They have the best doughnuts in the history of doughnuts. Their old-fashioned doughnuts are my favorite.

So I drop Laurel off, and think about swinging past the bakery to buy a doughnut for myself.

Comfort food for my grief, you know.

Every day, though, I turn to head back home instead of going to the bakery.

It’s an empowering moment — knowing I could make an unhealthy choice, but am choosing to make a good one.

Last Friday, I made my healthy choice, patted myself on the back, and went home.

Two hours later I had a meeting to attend. When I walked in the office at the pool I saw a box from Schneider’s Bakery sitting on the desk.

“Would you like a doughnut?” one of the guys asked and opened the box to reveal its contents.

“No, thanks,” I said, and looked longingly in the box.

We had our meeting. An hour later, he opened the box again to offer doughnuts to us.

I could smell them. I looked. And looked.

Finally, I pulled one doughnut out of the box and broke it in half.

“When you break them in half, the calories fall out,” I told him.

I took a small bite of my half-doughnut.

It was so good. Not too sweet. Not too doughy. Crisp on the outside and tender on the inside. Heaven in a doughnut.

I write all this to tell you two things:

And, two — Eating a doughnut is not a terrible thing. It’s a thing to be savored and enjoyed. Just not every day.