I was scribbling times and notes to myself on my meet program when I heard two boys talking behind me. Despite the loudness of the pool area — the splash of water, coaches yelling, parents cheering — their conversation caught my attention.

“You know, the water isn’t wet until you touch it,” said one.

“What are you talking about?” asked the other.

“The water isn’t wet until you touch it,” the first boy repeated.

“Nope, not until you touch it,” said the young metaphysicist.

I quickly wrote the quote into my program so I would remember it.

That conversation reminded me of a Dear Evan Hansen song which then ran through my head for the rest of the day. The song, Waving Through a Window, had nothing to do with water or wetness, but had everything to do with metaphysics of perception, but on a deeper level.

Evan Hansen had taken the classic question — if a tree falls in the forest and no one is around to hear it, does it make a sound? — and morphed into a question of something more.  The original question really is: can something exist without being perceived? That’s exactly what my young swimmers were discussing. Is water wet if no one touches it?

The question Evan Hansen asked was: when you’re falling in a forest and there’s nobody around, do you ever really crash or even make a sound? 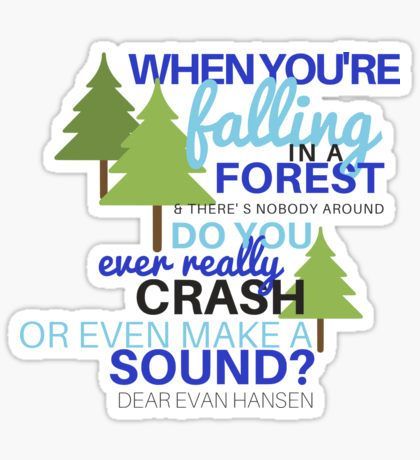 The whole song is sad, about being on the outside looking in and never really feeling like you belong.

It’s about the pain and insecurity of being vulnerable, and so choosing not to participate in society.

People see me at the store. They ask how my father is doing, and I hesitate in my answer. He mixes up the Jumbles and puts wrong answers in the crossword. He makes comments that make me blush, or make me upset, but ultimately remind me that he grew up in a different era. He needs help finding things — his wallet, his hearing aids, his pens — and I help him.

But when someone asks how he’s doing, all those things run through my mind and I say none of them.

Yesterday a woman placed her hand on my arm while I hesitated. “I know,” she said. “I know.”

And I knew that she knew.

If you are a caregiver and never tell people all the things you do, it doesn’t mean you don’t do them.

Like the tree crashing in the forest, people who have heard that sound know that it exists. Other caregivers know what goes on in the home.

I believe that water is wet even before I touch it, and that trees make a sound when they fall, and that when people struggle, even if nobody sees them, the struggle is still real.

That thought is a comfort to me.

And reminds me to be kind.

Taking a page from Osyth‘s playbook — I used  a line from the song for my post title.

3 thoughts on “It’s like I never made a sound”