When my father passed away at home, I didn’t know what would happen next — so I went for a walk.

That Sunday spent watching him decline, decline, decline — sitting by his bed — pacing — calling hospice and family and hospice again — trying to make the best decisions based on what he had said he wanted — it all made for an incredibly long day.

Yet, at the same time, the day was too short.

Suddenly he was gone.

I cut across the yard when I left the house, walking past the red maples he had planted 40 years before. Their burgundy leaves were half on, half off —  trees caught mid-way through their fall undressing.

The oak tree I passed was barer. Its brown leaves and acorns littered the ground. Many of the acorns were cracked and broken. I wondered if the damage had been done by squirrels or the fat woodchuck I often saw in that corner of the yard or the heavy equipment that had driven through there earlier in the week to replace our septic system.

The acorns held no promise of a mighty oaks, just broken pieces with jagged edges.

The walk refreshed me, but, back at the house, we moved in a thick fog.

While I had been walking others had left, or come and gone, or stayed, waiting to say good-bye to me.

My two grandsons had been in the house when my father passed. When I heard them playing in the other room, I thought about an article I once read about Irish wakes and how healthy they are for children — to be around death and see that it is a part of life.

In the midst of life we are in death.

I said good-bye to the grandsons and to my oldest son who looked so weary and so grown-up. I wished he was the size of his boys and this hurt was a boo-boo a bandaid could cover.

A knock on the door surprised me. The man identified himself as a hospice nurse. “I’m here to clean the body,” he said.

I showed him to the room where my father lay. My father’s face looked ashen and waxy.

“Do you have some clothes I could dress him in?” the nurse asked.

My father was still wearing his old red Fenway shirt. He liked to wear Red Sox apparel when he watched their games, and the last game of the season had been on when he passed away.

I chose a favorite flannel shirt and a pair of corduroy pants that went with it.

The nurse finished. He ushered us back in the room with my father.

My father’s hands were folded on his abdomen. It was a pose I had never seen him in before. He looked so dead.

I look for the resurrection of the dead and the life of the world to come.

It has now been 3 1/2 weeks since my father passed. When I close my eyes, I see that dead body. I see my sister coming out of his room, closing the door behind her, at 2 AM. She had just arrived and wanted to see him. I see the funeral director arriving at 8 AM and using the front door to remove the body.

I close my eyes and see death.

Ah, but the Nicene Creed. “I look for the resurrection…”

When I look for resurrection and life, it’s there.

The new grass pushing through the straw where the lawn was dug up for the septic. The two stubborn Shasta daisies that refuse to give way to fall. The geese flying south, calling my attention to them with their noisy honking. 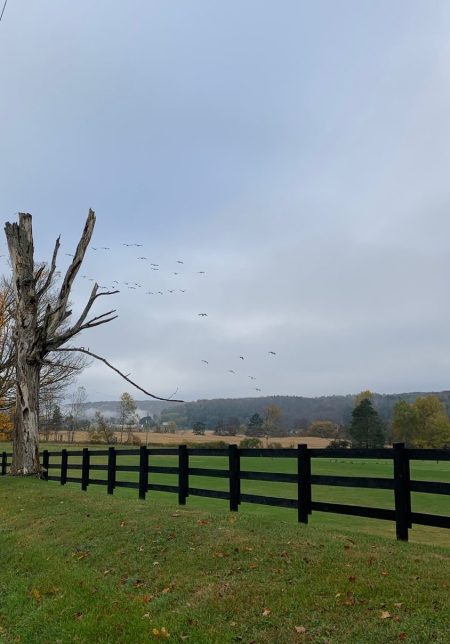 … Geese appear high over us,
pass, and the sky closes. Abandon,
as in love or sleep, holds
them to their way, clear
in the ancient faith: what we need
is here. …

I am surrounded by life in all its beautiful and terrible stages.

Many trees in the yard are already bare, but I’ve lived long enough to know that, in the spring, new leaves will appear.

I know the geese will return, too.

On my walks I see woolly bears hurrying across the road. Sometimes I help them along — picking them up and watching them curl into a ball in my palm, then gently placing them on the other side of the road. I figure it’s one less death for the day.

And I sort through a few of my father’s things.

← Blessed is the Quiet
Blessed are those who Stretch →

6 Comments on “Blessed is Resurrection”