Laurel brought a math problem to me the other day. 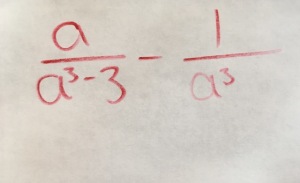 I looked at it and looked at it, but years of only doing grocery store math or tip calculations have eroded away much of the math soil in my brain. I found myself asking the question Mary, my non-mathy daughter, asked all the time — why do we need to know this stuff?

Back in the day, I loved math. A math sheet was a page full of puzzles to be solved, and they all had answers.

Now the variables and exponents and coefficients and fractions jumble together and refuse to tell me the story they’re supposed to tell.

In real life, when is a-cubed-minus-three going to be a denominator in any equation?

I decided to go for a walk to think about the problem.

The corn has been harvested in the fields down the road which makes them nice places to walk the dog. Our road has minimal shoulders and most of the drivers don’t care about the speed limit on it. It can be a little scary walking on it.

In the closest field, the harvesters missed a bit of a row on the edge. 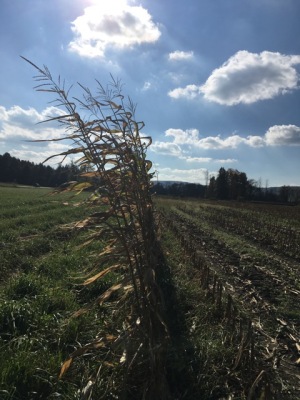 The stalks stand as sentinels — guarding nothing. 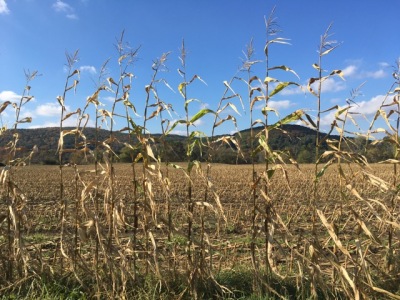 Nothing but a safe place to walk.

Sometimes in the summer, I would walk through the rows of tall corn to escape the sun and heat for a short leg of my walk. I would think about the time the farmer escaped from the nursing home that used to be down the road and wandered into the corn field. The state police had to bring helicopters to help find him.

But in the fall, the mowed rows are straight lines of what once was.

The shadows of the stalk stubs combined with the dried fragments of corn leaves made pretty patterns on the ground.

Maggie ran on ahead, and when I looked at her waiting for me down the field, I noticed where the planter had veered months ago — maybe because of an obstacle or maybe he was just distracted. The nice straight lines were not so nice and straight — like a math problem where the answer isn’t a sensible whole number, but full of exponents and variables.

By the time I reached the end of the row, I had figured out Laurel’s math problem. My brother had called me because I had sent it to him, and he confirmed what I suspected was the solution. It wasn’t a nice neat answer.

The end of the row was rounded. I could see where the tractor had turned.

The math erosion in my brain probably looks something like it.

Harvested — all that stuff I learned so many years ago gone now.

And rounded, like nearly every mental calculation I do.

Nary an exponent or variable in sight.